The 2014 Epcot International Food & Wine Festival is coming up very soon and starts on September 19 and goes until November 10. The festival celebrates its 19th year and runs for a record of 53 days this year. With 25-plus international marketplaces to experience in Epcot’s world showcase, 35 new food items have been added, along with many new wines, craft beers, and beverages. That is a lot of new food and beverages to try! I recently attended a media event that let us sample some of the new food and drink items for this year’s festival. With the addition of Patagonia marketplace and the return of Puerto Rico, there’s more flavors to experience in Latin cuisine. Farm Fresh replaces last year’s Florida Local marketplace and the Hops & Barley marketplace gets all new food items. The food we tasted are just a few of the 35 new items for this year. Check out the following dishes that are all worth stopping for on your Epcot Food & Wine flavor adventure. Patagonia is a new marketplace this year and replaces Argentina, but combines the flavors of South America in this area that is shared by Argentina and Chile. The Roasted Verlasso Salmon dish was actually the favorite of many media people who attended this preview event. The crispy crust of the salmon with the Arugula Chimichurri made a good combination of flavors and texture. It’s Puerto Rico’s return to Epcot Food & Wine Festival this year. I remember they had a marketplace a few years back serving a soup and other dishes. The “Ensalada de Carrucho” is a Conch salad that is light and refreshing, perfect for the warm Florida weather that will still be present at the beginning of the festival. The Baked Lobster Alfredo is one of those enjoyable dishes that is pure comfort food. Tender lobster with pasta and Alfredo sauce. It’s like a turned up version of an adult mac & cheese and tastes so good. The slider is Florida grass fed-beef served with warm Pimento Cheese on a soft bun. It pairs very well with a Mmmhops Pale Ale beer. The Farm Fresh marketplace replaces Florida Local from past festivals to feature farms from around the country, not just in Florida.The “Yardbird” is a seared chicken that is well seasoned and has a crispy skin. Dip the chicken in the house made habanero sauce for a very spicy kick. The greens are also well seasoned and different from what I’ve had in past festivals. The Griddled “Yard Bird” pairs with a nice local craft beer, Duke’s Cold Nose Brown Ale. The Sauerkraut Pierogi is new to the Poland marketplace this year, with a mild and enjoyable sauerkraut flavor that is paired with a hearty Pork Goulash. The Pierogi keeps it light and the Pork Goulash gives that savory flavors, creating a nice balance. The wine is slightly sweet and gives a nice contrast when pairing it with the Sauerkraut Pierogi with Pork Goulash dish. The Hungarian Wine is made in Poland and is quite refreshing. This version of Crème Brûlée has so much good caramel flavor with just the right amount of sweetness and a caramelized sugar on top. I think this may be one of the favorite desserts this year at the festival. Another good dessert to try, the moist and fluffy Carrot Cake with Craisins is topped with a sweetened Cream Cheese Icing. The iCing Grapefruit Sparkling Rice Brew comes from Korea and is a really refreshing drink with light notes of grapefruit.

So many new food and drink options to try at this year’s Epcot Food & Wine festival. Executive Chef Epcot Food & Beverage, Jens Dahlmann, was very excited to talk about many of the new dishes offered. With 35 new food additions to the overall menu, the festival will be a new food discovery experience. Festival marketplace menus do include gluten free and vegetarian options, so there’s food for everyone.

The International Marketplaces are only one part of the Epcot Food & Wine Festival experience. To find out more about specialty dinners, fine dining events, cooking demonstrations, seminars, and more, visit: disneyworld.disney.go.com/events-tours/epcot/epcot-international-food-and-wine-festival/

Check out the entire 2014 Epcot Food & Wine Festival menu below and make a plan for which marketplaces you plan to eat at.

Food items marked with * are new to the festival this year.

Disclaimer: I was invited to attend this media preview event. I was not compensated to write this post and all opinions are always my own. 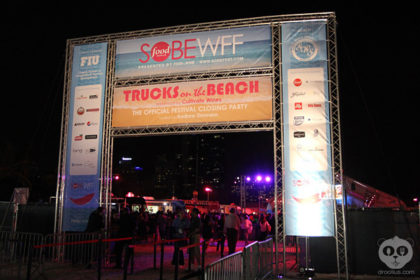