If there is a festival for all food lovers worth traveling to, it’s the Great GoogaMooga. I attended GoogaMooga’s first festival last year and it was seriously a blast. From tasting great food to awesome music from The Roots and watching chef demos to Anthony Bourdain on stage, this festival had it all. For 2013, GoogaMooga returns to Brooklyn’s Prospect Park for 3 days with an amusement park of food, drink and music on May 17, 18, & 19. So many good restaurants from around New York City and it’s boroughs, along with a few from out-of-town, this festival will be a concentrated food paradise for attendees. Check out the flyer and information below for food, drink, and music details. 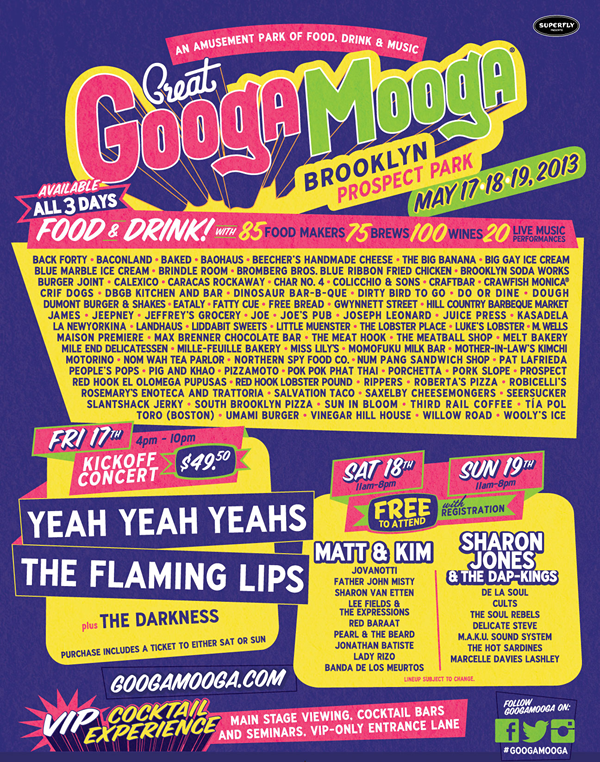 GREAT GOOGAMOOGA,
AN AMUSEMENT PARK OF FOOD, DRINK AND MUSIC
RETURNS TO BROOKLYN’S PROSPECT PARK
MAY 17-19, 2013

Yeah Yeah Yeahs and The Flaming Lips to Headline
a Kick-Off Concert on Friday, May 17, 2013

March 26, 2013 – Brooklyn, New York – Great GoogaMooga, Superfly Presents’ amusement park of food, drink and music, will return to Brooklyn’s Prospect Park May 17-19, 2013. In its second year, GoogaMooga will feature a three-day format, up from two days in 2012. Adding to its stellar culinary personality, whereby 85 of New York’s top restaurants are paired with 75 brews and 100 wines, this year’s GoogaMooga will see 20 live performances from the likes of Yeah Yeah Yeahs, The Flaming Lips, Matt & Kim, Sharon Jones & the Dap-Kings, The Darkness, Jovanotti, Father John Misty and De La Soul.
Tickets to Friday night’s kick-off concert with Yeah Yeah Yeahs, The Flaming Lips and The Darkness, along with tickets to the VIP Cocktail Experience for Saturday, May 18 and Sunday, May 19 will go on sale Thursday, March 28 at 12pmEST. Complimentary, General Admission tickets for Saturday, May 18 and Sunday, May 19 will be available in an online giveaway running Monday, April 1 at 12pmEST through Wednesday, April 3. Complimentary tickets will be awarded at random and recipients will be notified by email on or before Wednesday, April 10. All tickets will be available at www.googamooga.com

“We’re excited to be returning to Prospect Park for year two of GoogaMooga,” said Jonathan Mayers, Co-Founder, Superfly Presents. “The community in Brooklyn is a cultural cornerstone to New York City and the Park is a perfect place for everyone to come together to celebrate and get a taste of what makes this city one of the best in the world.”

“Brooklyn is thrilled to welcome back Great GoogaMooga for a second year of ‘eats’ and ‘beats’ – not to mention some of the city’s best mixologists, winemakers and brewers to go along with all that great food and music – Brooklyn style! Brooklyn is the Creative and Cultural Capital of New York City and an international culinary destination, so Great GoogaMooga is right at home here, and there is no better place than our magnificent Prospect Park to host the festival. Bravo to Superfly Presents, the Prospect Park Alliance, the New York City Parks Department and all of their partners for the return of Great GoogaMooga – not just two days this year, but three – which means even more economic activity, more visitors and, of course, more fun!” said Brooklyn Borough President, Marty Markowitz.

“Great GoogaMooga is a celebration of food, music and Prospect Park – three things that make Brooklyn such a wonderful place to live, work and play. Frederick Law Olmsted, Prospect Park’s brilliant co-designer, intended for the Park to be a great gathering place, as well as a place of quiet respite. We are looking forward to the Great GoogaMooga returning to Prospect Park in 2013,” said President of the Prospect Park Alliance and Park Administrator, Emily Lloyd.

On the Menu at GoogaMooga

Restaurants will once again serve food from charming hand-painted booths, reminiscent of old New York storefronts, and some will be found in areas like Pizza, Burgers, Sweet and Hamageddon. Inspired by the pig for all its porcine deliciousness, Hamageddon features Henri, a two-ton steel pig who is 22 feet, nose-to-tail. Guests will find Henri cooking food from a fiery rotisserie in his belly, vendors like Pig and Khao, Pork Slope, The Meatball Shop and Crif Dogs devoting themselves to mind-blowing combinations of bacon and pork, and BaconLand serving up bacon flights.

This year, GoogaMooga will partner with WORD and Housing Works Bookstore Cafe to add a new element that highlights the ripe intersection of food, drink, and literature at Café GoogaMooga, a tented area with a coffeehouse ambiance. Café GoogaMooga’s Literary Stage will spotlight writers – from celebrity-chef authors to critics, novelists, comic artists and poets – who are using food and drink as the main ingredients of their craft.

The Beer Experience and the Wine Experience, led by Peter Eastlake, who was recently named a Food & Wine magazine Sommelier of the Year, will return to offer extensive tastings and the opportunity to meet leading winemakers, brewers, importers and sommeliers (listed below).

Speaking to some of the improvements coming to the festival, Superfly’s Mayers said, “We always learn a lot from first year events and taking all the feedback into account, we will be expanding the festival’s General Admission footprint; increasing points of sale and improving transaction speeds for food and beverage purchases; offering a revamped VIP experience; and working with national cell phone carriers to add temporary cell phone towers.”

On Stage at GoogaMooga

This year’s music performances will take place on two stages: The Nethermead Stage and The Joe’s Pub Stage, presented by Lexus and curated through a partnership with Joe’s Pub at The Public Theater, one of New York City’s most celebrated venues for emerging and established performance artists. Lexus will also host their Culinary Masters program on the Joe’s Pub Stage with three award-winning and brand ambassador chefs. The Michelin-starred Christopher Kostow of The Restaurant at Meadowood will prepare a three-course menu at a Chef’s Counter on Saturday while on Sunday, Michelin-starred chef and international restaurateur Daniel Boulud along with James Beard Award Winning chef Michelle Bernstein of Michy’s in Miami will conduct cooking demonstrations.

Each of GoogaMooga’s three days will offer different lineups of live music:

Friday evening will feature GoogaMooga’s kick-off concert headlined by New York City rockers Yeah Yeah Yeahs and The Flaming Lips, both of which have highly anticipated new albums being released this spring. British glam metal band The Darkness will also perform. While a majority of the festival will be open on Friday, some of its areas will not be open until Saturday. Friday ticket buyers will be guaranteed one complimentary ticket, per ticket purchased, to either Saturday or Sunday.

GoogaMooga’s VIP Cocktail Experience gives ticketholders premiere viewing of the Nethermead Stage and exclusive access to the festival’s only cocktail experience. Curated by acclaimed mixologist Julie Reiner, Partner and Beverage Director of Brooklyn’s Clover Club and Owner of Manhattan’s Flatiron Lounge, the VIP Cocktail Experience creates the ultimate “bar” with cocktails by some of New York’s most loved and trendsetting destinations: Dead Rabbit Grocery and Grog, Pouring Ribbons, The Library at The Public, The Nomad, Booker & Dax, PDT, Clover Club, Pegu Club, Flatiron Lounge, and Death & Co. Cocktails will be served in both Prospect Park’s Boathouse, a stunning historical building dating back to 1904 that overlooks the Lullwater and Lake, and in a tented venue in the Nethermead Meadow. Reiner will also be hosting cocktail demos throughout the weekend. VIP tickets include five drink tickets to the area’s cocktail bars for ticketholders who are 21+.

COCKTAILS
Found in the VIP Cocktail Experience Only

Friday, May 17, 2013
Yeah Yeah Yeahs
The Flaming Lips
The Darkness

* Signifies Artists Curated through a Partnership with Joe’s Pub at The Public Theater.

The Great GoogaMooga lineup is subject to change.


About Great GoogaMooga: Great GoogaMooga is an amusement park of food, drink and music produced by Superfly Presents, the Co-Founders and Producers of Bonnaroo and Outside Lands, in partnership with entertainment entrepreneur Peter Shapiro (Brooklyn Bowl, Capitol Theatre, Relix Magazine). Returning to Brooklyn’s Prospect Park for its second year, GoogaMooga will take place over the course of three days, May 17, 18 and 19, 2013. The festival will see 85 of New York’s top restaurants paired with 75 brews, 100 wines and 20 live performances.