Sometimes two worlds of awesomeness combine for a great collaboration. In this case, two iconic brands based in New York City bring fashion and food together. Shake Shack and Staple Design have come together to crate a special product capsule and frozen custard concrete dessert. I’ve been a big fan of both brands for a number of years now and I’m excited to see this project happen. Read more below about the limited edition t-shirt and sunglasses that make the product capsule and are available online while supplies last. The “Staple Concrete” dessert also has a limited offer as well, from September 12-21, exclusively at certain NYC Shake Shack locations. 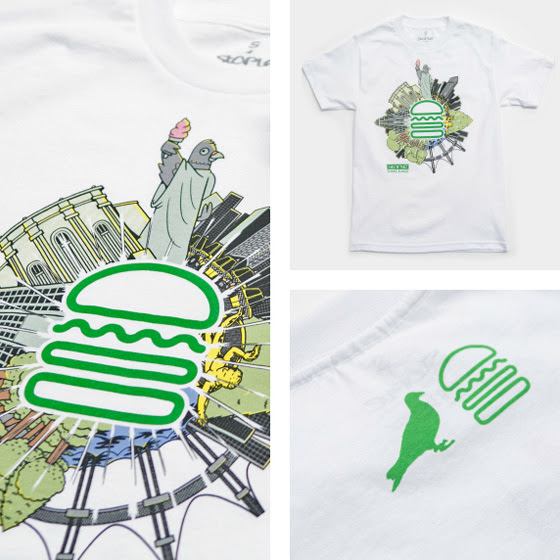 Shake Shack is proud to announce it has partnered with world-renowned creative consultancy, Staple Design, for a limited edition product capsule (t-shirt and sunglasses) and frozen custard concrete. All three collaborative products launch on Friday, September 12.

The t-shirt—designed by Staple founder Jeff Ng (a.k.a., jeffstaple)—features a vibrant and fun Shack-inspired graphic that incorporates elements from both brands, including the iconic Staple Pigeon and NYC landmarks like the Flatiron Building, Empire State Building, Brooklyn Bridge, and more. Each t-shirt comes packaged with a 5”x7” print of the t-shirt graphic on heavyweight card stock. 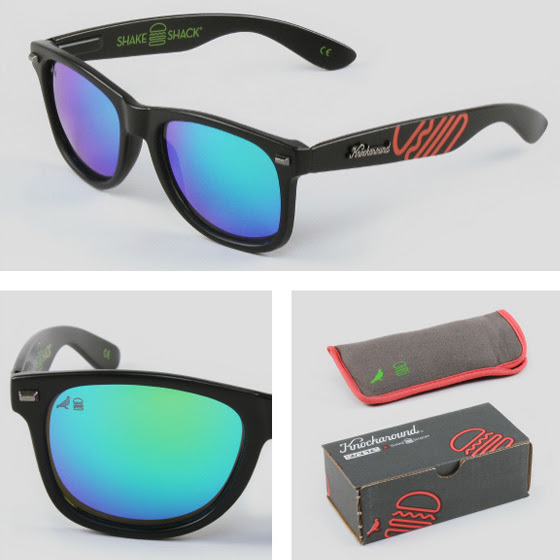 The limited edition sunglasses are a three-way collaboration between Shake Shack, Staple, and acclaimed lifestyle eyewear maker Knockaround. The black, matte-finish “Fort Knocks” model sunglasses feature co-branding on the inside and outside of both hinged arms, gunmetal hardware, and green/blue mirrored lenses with Shake Shack and Staple logos discreetly etched into the top corner of the right lens. Each pair of sunglasses comes packaged in a co-branded box with padded carrying case, neoprene strap, die-cut stickers, and voucher for a free single cup or cone of Shake Shack’s fresh-made frozen custard ice cream (redeemable at all US Shacks excluding airports, stadiums, and event venues). 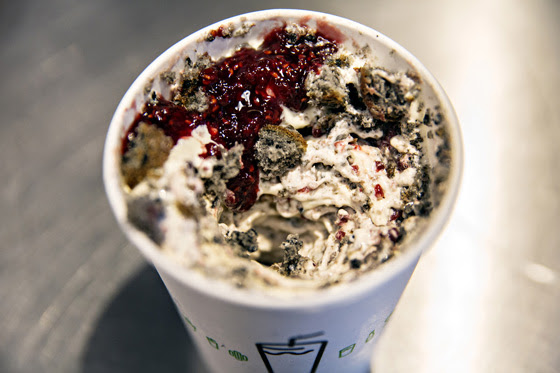 “I could not be more proud of this collaboration,” says jeffstaple. “I’ve been a fan of Shake Shack since back when there was only one location in Madison Square Park. I’m also a die-hard Doughnut Plant fan because I’m a 15-year resident of the Lower East Side, where they’re located.”

“This collaboration has ‘NEW YORK CITY’ written all over it,” he continues. “It’s great to see that something I created in the street culture fashion market can now be translated to the culinary world. Thanks to everyone at Shake Shack for making my dream a reality!”

This is the first time both brands have worked on a collaboration of this nature, where food and fashion truly merge. To experience the creative process in full, please check out the Shake Shack x Staple video and photo gallery at shakeshack.com and staplepigeon.com. The video was filmed and produced by Mario Kristian, and Dorothy Hong snapped all photos.

The Staple Pigeon is a globally recognized symbol that reflects the gritty and reckless energy that New Yorkers—and all urban dwellers—possess. It not only exists as a representation of NYC, but it also influences Staple’s extensive apparel range and collaborative products that are sold at top retailers worldwide.

About Shake Shack
Shake Shack is a modern day “roadside” burger stand known for its delicious burgers, hot dogs, fries, frozen custard, beer, wine and more. With its fresh, simple, high-quality food at a great value, Shake Shack is a fun and lively community-gathering place with widespread appeal. From its premium ingredients and progressive hiring practices to its environmental responsibility, design and deep community investment, Shake Shack’s mission is to “Stand For Something Good.”